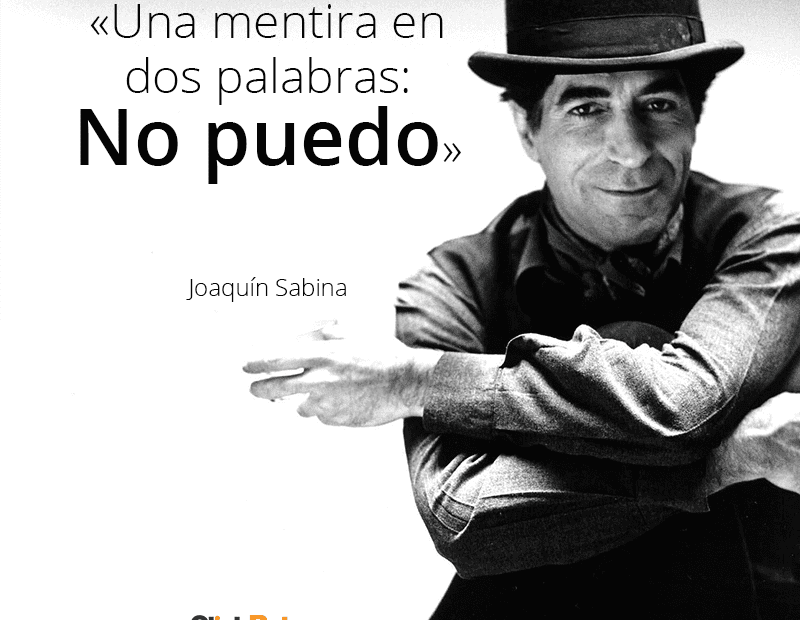 He finally went into exile in London after putting a Molotov cocktail in a branch of the Banco Bilbao in Granada in protest against the Burgos trial. One of the facts that also draws attention is that he forged his passport and began his journey as a «political exile» under the new name of Mariano Zugasti.

He published a book of sonnets called Ciento volando, inspired by and dedicated to filmmakers, actors, writers, bullfighters and singers. In the summer he suffers a slight cerebral infarction. After a few months of retirement from the stage, he returned to record a new album called Dímelo en la calle (2002).

Ramon Gieling directed a film about Joaquín Sabina’s life entitled «19 días y 500 noches» and whose main theme is the depression and illness the singer went through. Fito Paez invited Sabina to his recital in Madrid and with this action a long awaited reconciliation between both artists would take place. Together they recorded a version of «Contigo».

In addition to singer-songwriter, composer and journalist, Joaquín Sabina also devoted himself to literature and painting and included one of his works during the «500 nights for a crisis» tour in 2015. He also published the book Muy personal, which included drawings, started poems and unfinished lyrics.

4. And I returned to the curse of the drawer without his clothes, to the perdition of the cocktail bars, to the ashes of balance and corner. And for those sales of fine Laina, paying the bills of soulless people who lose their cool with cocaine. – 19 days and 500 nights

20. I wanted to tell him the truth, however bitter it was. To tell her that the universe was wider than her hips. I painted her a real world and not a rosy one, but she preferred to listen to white lies. – White lies

38.  With seven thorns from the flower of adultery, seven farewells in a season, seven chrysanthemums in the cemetery, seven cardinals in the heart. I fall in love with everything, I am content with nothing. – Seven Chrysanthemums

My Annie Hall, my Gioconda, my Wendy, the ladies first, my Cantinflas, my Snowball, my three Musketeers, my Tintin, my yo-yo, my tile, my seven of glasses, the hallway where I undressed you without taking off your clothes. – The most beautiful song in the world

Acne is and always will be a symbol of puberty, adolescence and youth, while wrinkles are a symbol of old age. In this beautiful verse, Sabina comes to tell us that he would change his old age for the youth of another person without thinking twice.

We continue with some of Joaquín Sabina’s love phrases, some quotes so that you know some of the most beautiful, romantic and nostalgic verses of the singer. Do you want to dedicate a beautiful love phrase to that special person? In this section you will find great ideas…

I wanted to tell him the truth, no matter how bitter it was. To tell him that the universe was wider than his hips. I would paint her a real world and not a rosy one, but she preferred to listen to white lies.

If you have ever loved someone with all your soul, you will know that being in love means wanting to be with that special person at all times, to live the good and bad moments by their side. Are you looking for a List of Romantic Phrases to Fall in Love? In this other article we offer you some of our favorites.

Phrases of the tide

Everybody likes Joaquín Sabina’s phrases, the songs that our parents sang and that have reached our days still in force never go out of fashion. Sabina essentially sings about heartbreak, failure and breakups, although he also talks about Boca Juniors, friends, nights out, etc. In Sabina’s phrases we find all kinds of stories, from those that last only one night and leave an indelible mark, to the heaviness of conjugal love, with its sweet moments. In this category we discover the best of the ubetense singer through his most famous lyrics.